This is probably going to be the shortest write up of all time, because I’d written the longest write up of all time, then thanks to my Magic Mouse and OS X Lion on my Mac, an accidental and tiny single finger swipe acts as a “back button” and I lost it all. Good times. Anyhoo… this is only 8 days later than it was scheduled to be released, but here we go (additional excuse is the badass History of the NHL infographic i posted today).

This week, the King of North America makes folks in Carolina red with rage and people in Columbus ever so blue. But to compensate, the residents of Seattle and Quebec City are now very loyal and happy subjects. 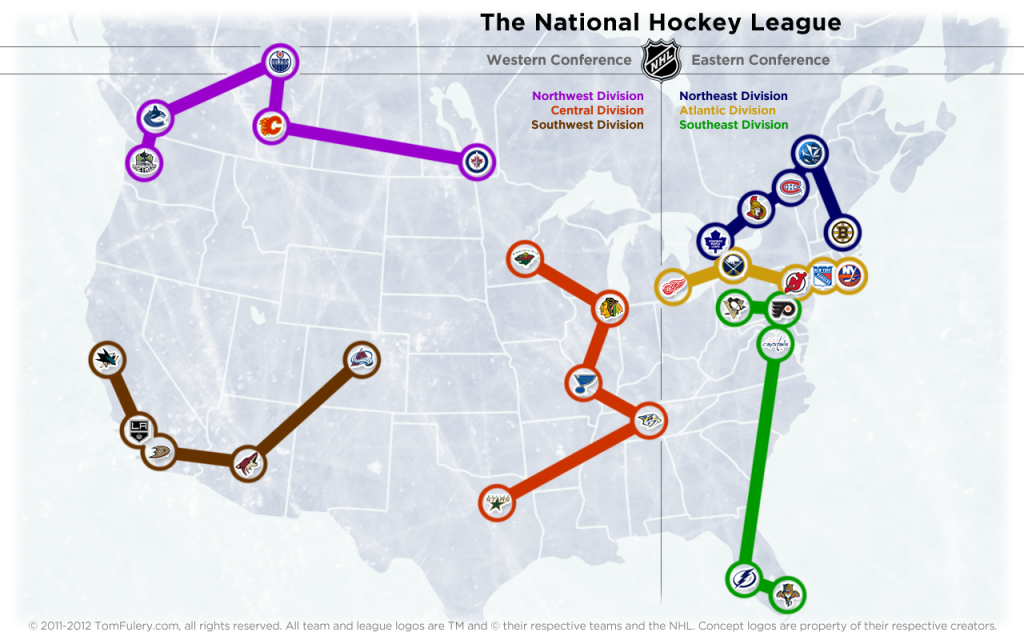 Seems like more fans prefer the 2 Conference alignment, than the 4 Conference one, so I’ll go with majority opinion this week. But, since I now follow Gary Bettman on Twitter (he has THREE tweets!), let’s make him happy too and keep the conference names geographic.

The Pacific is now called the Southwest Division since Colorado and Phoenix are not even in the same time zone as the Pacific Coast. I couldn’t come up with a name to replace “Atlantic” but I’m sure that Detroit fans will be so overjoyed to be out of the Western Conferene, that they won’t mind. If any of you have a name that makes more sense for an eastern division that strays pretty far away from the coast, I’m all ears (aka put it in the comments).

Columbus and Carolina (hey, Phoenix won their division, we’ve got to throw them a bone this week, right?)

• Travel — Only team with any legitimate beef is Winnipeg. But the folks in Manitoba will be more than thrilled to trade some late starts out West for much more meaningful rivals from Alberta and BC. Other than the Jets no team has to travel more than one time zone over for in-division games. Commence rejoicing, people of Dallas and the Twin Cities!

• The East gets its Wings — Commence rejoicing, people of Detroit!

• Fairness — Divisions are made up of exactly the same number of teams. Everyone has the exact same chance to make the playoffs as everyone else… math says so! (Math doesn’t care that one five team division might have 4 amazing teams while another division might only have 2). Happy now, NHLPA?

• Rivalries —  While I admit that some traditional rivalries are lost (PHI/NYR, DET/CHI), the vast majority of the big rivalries remain intact (TOR/MTL, TOR/OTT, NYR/NJD, NYR/NYI, PIT/PHI, EDM/CGY to name a few). Besides my scheduling (see below) demands that every team plays every team both home and away at least once each… even the Wings and Hawks will still have a couple of tilts (not to mention what an amazing Stanley Cup finals that would be). Watch for great new rivalries in SEA/VAN, MTL/QBC and even DAL/NSH (trust me on this one).

Each team plays all it’s non-conference opponents once at home and once on the road: 2 games x 15 teams = 30 games

Each team plays its in-division opponents three times at home and three times on the road: 6 games x 4 teams = 24 games

Each team plays its in-conference (non-divisional) opponents once at home and once on the road: 2 games x 10 teams = 20 games

And finally, each team plays an additional home-and-home series against two teams from each of the in-conference divisions not its own. This will cycle through all 10 such opponents in less than 3 seasons: 2 games x 4 teams = 8 games

• Two best records in the conference outside of the divisional “top-two” also qualify.

• Divisional positioning only guarantees a spot in the tournament, not seeding. The eight teams that qualify are seeded 1-8 based on record.

• Round Two: Conference Semifinals — Round One survivors are reseeded. Highest seed vs lowest seed, 2nd highest vs 2nd lowest

The next NHLRP installment (or maybe the one after that) will finally touch on something for you football (round ball, actual foot use) fans. Two words for you… AHL & Relegation! ***DROPS MIC—WALKS OUT DOOR***