Welcome  back, true believers. Week two is upon us. This week we’ll look at a slightly more plausible scenario for the NHL’s 2012-2013 season. The league stays at the current 30-team count and the only team joining the Winnipeg team in relocation (now with a Jets logo on the map), is the Seattle Coyotes.

Almost everyone seems to agree that the “save” that Glendale/NHL team was able to perform this year is more of a “save with a fat rebound that will be slammed home” next year. So I’m moving ’em. Just like Week One, the Coyotes are going to Seattle. Hamilton, Quebec, KC and Las Vegas will have to wait (for now).

The 30-team league breaks down into Eastern and Western Conferences again. Each conference has two divisions. I tried labeling the divisions geographically at first, but it didn’t seem right to have Detroit and Columbus in a “Southeast” Division, so I went with (arguably) the biggest names to play for a team in the new divisions… Gretzky, Hull, Orr and Howe. I’ll let sons and fathers argue over which Hull we’re talking about. ?

Seeing how 30 isn’t divisible by 4, and how my number one goal for this realignment was to get all Eastern Time Zone teams into the Eastern Conference I’ve gone with an unbalanced lineup. The two Eastern Divisions each have 8 teams, while the two Western Divisions each have 7 teams. Anyone who doesn’t like this, please refer to my King of North America Defense again.

So after that long intro, here are the goods:

• Time Zone Harmony — Much to the delight of TV-watching fans, Time Zone insanity has been nearly eliminated. Only three teams have to leave their time zone for divisional road games… and exactly zero teams have to travel more than one time zone away for those same games (again, Dallas and Minnesota, you’re welcome).

• Fairer travel — Extension of the first benefit. Like last week’s plan, this mitigates some of the unfair travel strain placed on teams with the current league lineup. Sure, Western teams will still have to travel more often than their Eastern brothers, but geography and population clusters make a pure balance pretty much impossible. This is better than the current plan.

• New rivalries — Seattle becomes a natural rival for Vancouver. Detroit, Philly and Pittsburgh bring some gravitas to a reasonably young set of teams in the Howe Division… not to mention Penguins developing a thirst for proving to the Wings that Lemieux was snubbed in the division naming process. Dallas and Minnesota get to play more often and hash out their “you stole our team/suck it, we’re better” feud. Throw in a new Jets/Blues/Stars “they mean OUR Hull” rivalry and we’ve got some good stuff. 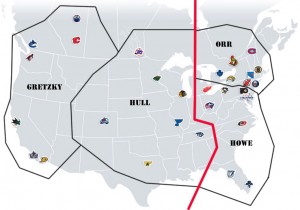 And there you have it. Off to bed (and to ponder next week’s realignment).