Back by popular demand, I’m going to be putting forth a realignment scenario that involves… Gary, hide your eyes… contraction.

The more I think about it, the more I realize it just won’t ever happen. The following forces would rise up to fight it:

But, since I am King of North America, let’s ignore all those factors and just do it one more time. Here we go… 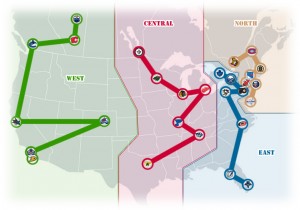 Since I am a great and kind king (unless you’re a Coyotes or Columbus fan), I’ve tossed Gary a bone by sticking with his 4-Conference set up, and tossed the players (well, the 93.3% percent that didn’t get pink slips) one as well by even-ing up the number of teams in each conference and keeping the travel reasonably limited to north-south in nature.

An additional Home-and-Away versus a single opponent in each of the conferences not your own (to rotate through the league every 7 years): 1 home & 1 away vs. 3 teams = 6 games

TOTAL = 84 games (a.k.a. still not enough for Gretzky’s single season records to be threatened)

Top four in each conference qualify. First two rounds determine Conference Champions. Third round is the semi-finals (with the team with the best regular season record choosing his opponent). Fourth round is the Stanley Cup Finals.

Dear, Columbus and Phoenix, I promise you get to keep your teams next week. I’ve been mean enough for long enough. Everyone deserves a break, right?