First of all, sorry (again) for the very late post this week… Trying my best to get back on schedule, and with the bombshell today of the NHLPA forcing the NHL to drop its realignment plan, I REALLY need to get back on track as traffic is gonna pick up again on this blog. But I digress… back to the show:

With all the news, this is my last installment of the “Seeking 32” concept (for a while at least). I’ll be switching back to more viable plans since Gary B. and the Boyz™ will be Googling for solutions and land here on the site soon. So here’s the plan. Just like last week, we’re going to subdivide our 8-team conferences into two 4-team scheduling pods again. One major change from last week is the “College Football-ification” of the NHL South. Adding Houston and KC and removing Washington, has given this regional conference a very unified regional feel. The atmosphere would be great, I think. Plus, the recent sale of the Dallas Stars to Tom Gaglardi and the instant uptick in attendance proves that (with strong front-office backing (and lower ticket prices)) hockey can flourish in Big12/SEC country.

On another fun note, DC and Ottawa could become an interesting conference rivalry the two capital cities going at it six times per year would be cool. 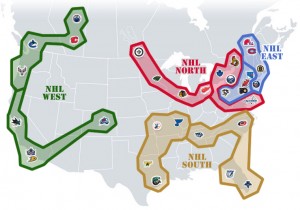 Again, our conferences all have eight teams… but each is made up of 2 pods of four teams (pods are only for scheduling reasons). Conferences are named for the four cardinal directions: West, South, East, North.

• Scheduling — We’ve finally cracked the code for scheduling… the scheduling pods made all the difference. See the “scheduling” section a little below for the deets.

• Something Closer to Travel Equity — Unlike all the efforts to minimize travel that so many have strived to achieve, we’ve actually increased travel for most teams. In an effort to create a more balanced travel schedule across the league we’ve “forced” every team to be in a conference that has a “medium-distance” travel load. The NHL West has a heavier north-and-south travel burden… while the NHL North and the NHL South have a heavier east-and-west travel burden. The East kinda escapes the heaviest of the travel, but thems-was-da-breaks in my effort to get the scheduling pods to work best and keep rivals together as best as we could.

• Rivalries —  The major rivalries preserved in Gary’s plan are still here but amplified with the scheduling pods, plus we get new DAL/HOU, KC/STL, OTT/WSH, POR/VAN a to enjoy now… not to mention the Montreal/Quebec rivalry that will be revived as well. Detroit and Chicago stay together. In the few instances where a good rivalry didn’t stay together in a pod (NYI/NYR, DET/TOR)… they are still in the same conference an so do still play each other more often than non-conference opponents. Speaking of scheduling…

Each team plays it’s in-conference opponents (but not in-pod) twice at home and twice on the road: 4 games x 4 teams = 16 games

If they gave out Nobel Prizes for this kind of work… I’d like your support during the process. If a Nobel Prize is outta the question, I’d settle for life-time tickets to the Stanley Cup finals……….. or some backlinks.

Just when we’d figured it all out, the NHLPA throughs a wrench into the works. Bright side? More blog traffic and TONS of ad revenue (I’m down to 11 years to go before I’ve earned enough to get my first check from Google) ?