First of all, sorry for the very late post this week… Christmas and its aftermath have been a beatdown. But better late than never, eh? This week we take our “Seeking 32” idea and mess with it a bit. We do get to 32 teams in 4 conferences, but we through a tiny bit of a wrinkle in things by further dividing each conference into 2 pods of 4 teams each… now, before everyone freaks out, it is FOR SCHEDULING REASONS ONLY! Come back down off the ledges please, everyone… we’re not even gonna name them. Playoff format is still the same (top four in each conference qualify, but now you intensify the rivalries with your traditional and/or closest rivals and the schedule is a little more sensible. 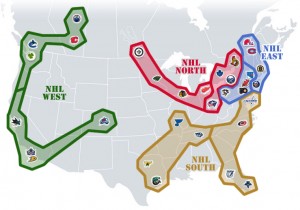 Again, our conferences all have eight teams… but (only for scheduling reasons), each is made up of 2 pods of four teams. Conferences are named for the four cardinal directions: West, South, East, North.

• Scheduling — We’ve finally cracked the code for scheduling… the scheduling pods made all the difference. See the “scheduling” section a little below for the deets.

• Something Closer to Travel Equity — Unlike all the efforts to minimize travel that so many have strived to achieve, we’ve actually increased travel for most teams. In an effort to create a more balanced travel schedule across the league we’ve “forced” every team to be in a conference that has a “medium-distance” travel load. The NHL West has a heavier north-and-south travel burden… while the NHL North and the NHL South have a heavier east-and-west travel burden. The East kinda escapes the heaviest of the travel, but thems was the breaks in my effort to get the scheduling pods to work best and keep rivals together as best as we could.

• Rivalries —  The major rivalries preserved in Gary’s plan are still here but amplified with the scheduling pods, plus we get a Dallas/Houston one to enjoy now… not to mention the Montreal/Quebec rivalry that will be revived as well. Detroit and Chicago stay together. In the few instances where a good rivalry didn’t stay together in a pod (NYI/NYR, DET/TOR)… they are still in the same conference an so do still play each other more often than non-conference opponents. Speaking of scheduling…

Each team plays it’s in-conference opponents (but not in-pod) twice at home and twice on the road: 4 games x 4 teams = 16 games

If they gave out Nobel Prizes for this kind of work… I’d like your support during the process. If a Nobel Prize is outta the question, I’d settle for life-time tickets to the Stanley Cup finals……….. or some backlinks.