So this is the final iteration of the idea started three weeks ago, that of the “Champions League”. We started with a league that consisted of only teams that had won the Cup, and then we expanded it to include teams that had made it to the Stanley Cup finals, but not necessarily won it. This we we push it a bit more, and admit any team who have at least made it to the Conference Finals… 26 teams in all.

Our league is divided them into four conferences, two of six team and two of seven. As per our most common custom in the NHL Realignment Project, the top four teams in each division qualify for the playoffs. Each division determines its champion followed by the two conferences crowning champs who square off for the Stanley Cup

So Here is The Map: 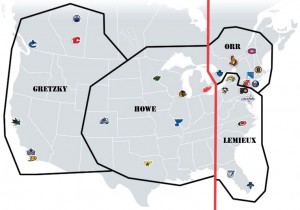 Phoenix, Winnipeg, Columbus, Nashville (Can you believe there are only four teams that haven’t made it to at least the conference finals?)