Expanding on the idea that started two week ago, this week we’re expanding by six teams (à la 1967). The six teams we’ve allowed into our “Champions League” are the teams that have be able to make it to the Stanley Cup Finals, but haven’t won. They’ve earned their stripes, and now have the chance to make that final step.

We’re a 24-team league in this format, and we’ve divided them into four conferences, each of which fill out a playoff bracket with their top four teams. Playoffs involve the four teams deciding a Conference Champion which lead to a “final four” that reseed to determine semi-final opponents… best record plays fourth best… second best record plays third best. 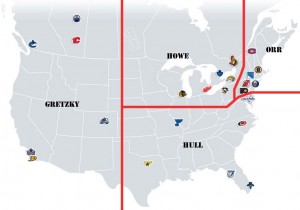 • Talent — While we’re not cutting 40% of the teams out of the NHL like the last two weeks, we are still doing some significant chopping. Teams will have plenty of talent to choose from to replace their lesser players with guys from the six shuttered franchises.

• Amazingly Finals — Making the playoffs reseed for the semi-finals, should (more often than not) yield a better Finals matchup. No more “the last round help better matchups than the Finals” talk.

• Tradition — When the league is made up of only teams that have won it all or made it to the Finals, tradition is pretty much built in.