Okay, last week we took things to the limit by having 44(!) teams, so this week we pull back. The number of the week is THREE. We’re scuttling the THREE teams that get the most chatter on the internets about being in trouble… The Islanders, The Coyotes and The Blue Jackets.

The thing with this plan is we now have 27 teams… an uneven number. That is true my mathematical mates, but it isn’t a prime number so we can still divide. This week’s plan calls for breaking the NHL into THREE divisions of 9 teams each… No conferences.

In my new NHL Realignment, the top 5 teams in each of the THREE divisions make the playoffs, and the team with the next best record qualifies for the playoffs as a wildcard. Division champs plus next best record are the #1 seeds in a 16-team playoff bracket. The four #1 seeds go through a “draft-and-position” process to build their respective quadrants of the bracket. Woot! 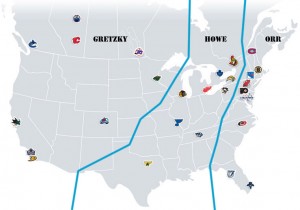 • Travel — Minnesota and Winnipeg won’t think so, but there is a better balance of travel than in the current NHL. The Wild and the Jets are playing the role that the Stars currently play as the “WTF is up with our travel” teams… but to be fair, they at least have each other as divisional rivals which isn’t that far to travel. No Eastern Time Zone teams have West Coast Conference rivals (hard to compare completely, since there are no more conferences), but the Red Wings would love this.

• Talent — Less teams (theoretically) mean better hockey. The rosters of the three eliminated teams get pilfered for their best talent, who in turn replace the dregs of the teams that are left. I’m of the mind that there is TONS of talent in this league and that this won’t be as pronounced an influence as proponents of contraction say it will be, but on the other hand, you can’t argue against the fact that A’s and B’s are better than D’s and F’s.