Week 13 – There and Back Again

Who says you can’t make all the people happy all the time. In this week’s edition of the NHL Realignment Project, every city that ever lost a team (and currently doesn’t have one), get’s one back. This generosity yields a 37-team league. This number (and the geographic groupings) causes some awkwardness as far as division goes, so we’ve scraped the idea of divisions altogether and gone with four Conferences (three 9-team conference, and one 10-team conference).

Like in Week 8, the top four teams in each conference qualify for the playoff tournament, and my awesome invention is back… the team that wins the President’s Trophy (best regular-season record), get’s to decide which conferences will be in each quadrant of the bracket. 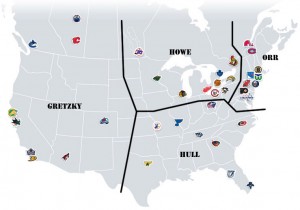 • Happiness — Every hockey city that ever was, is on this map. No more complaining about the “team that was stolen from us”. Hooray!  (NOTE: Yes, I know that there was a “Brooklyn Americans”, but they never actually played in Brooklyn (just in Manhattan), so I opted to let them go the way of the Colorado Rockies and let the current team in the city be the representative of the past as well).

• Clusterific — Other than Columbus, there are reasonable clumpings of cities that happens ont this map. The conferences take advantage of that. Travel stays reasonably under control and lots of geographic rivalries can develop.