This week we mashup the good ol’ Divisional NHL with NCAA Basketball and toss in some Canadian Pride for good measure. The current 30-team NHL sees no relocation, but sees expansion into Quebec City and Hamilton… getting us up to the oft-dreamed-of 9 teams north of the border and even-more-oft-dreamed-of 32-team total scenario. The upper-right of our map is jammed packed now, so let’s see what we can do… Gone is the idea of two geographic Conferences. Again, think NCAA conferences instead. Four of ’em to be exact. 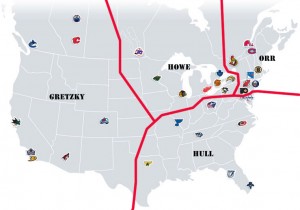 • Canadian Teams Galore — Hamilton and Quebec (re)join the NHL, bringing the number of Canadian teams up to nine.

•  No more Eastern/Western Conferences — It’s no longer about East/West geography. Now we have four Conferences of 8-teams each.

• Fan-freindly scheduling (with benefits) — You play in EVERY building at least once and every team plays in yours at least once. So every superstar can (barring injury) be seen in every city.

• Rivalry-unfriendly scheduling (with malevolence) — As you’ll see in the playoff formatting, this NHL is about winning your Conference and getting a “Number One Seed” to the playoffs. Teams will play each of their seven in-conference opponents four times per season (2 home, 2 away) and want to kill each other to guarantee a top-seed in the playoffs. Anger-management be damned!

• Slightly shorter regular season — If you’ve done the math from the previous two bullets, that comes out to a 76-game season. That’s less wear and tear on the players (meaning better playoffs), and we get to playoff hockey sooner. Speaking of that, as King of North America, I’m mandating that we start the season a month earlier and end it two months earlier. So we start at the beginning of September and end at the end of March—leaving playoffs for April and May. I’d rather compete for eyeballs against a Sunday-heavy NFL at the beginning of our season than directly with an NBA finals at the end.

• So let’s get to the playoffs already — In lots of sports, finishing in the top three means something special. Win, place, show in horse racing. Gold, Silver, Bronze in the Olympics, Champion, Runner-up, Third-place Winner in World Cups. This version of the NHL will have some of that same mentality… at least when it comes to playoff seeding. Teams finishing first, second or third in each of the four conferences qualify playoffs and are seeded #1, #2 and #3 in their respective “Conference Quadrant” of the playoffs bracket, giving us our first 12 teams. So your main reagular-season goal is to get into and stay in a top-three position in your conference. To change things up from the “good ol’ top-four-teams-in-the-division-make-it-to-the-playoffs” (and to be a little more fair to a really-good-fourth-place-team-in-a-great-conference), the best four teams (regardless of conference) after these initial 12 will qualify as “wildcards”, bringing us to 16.

• To the victor(s) go the spoils — Now, we build the bracket. As the team with the best regular-season record, the winner of the President’s Trophy holds all the cards. The bracket has four Conference Quadrants, each with their #1, #2, and #3 seeds established via regular season records, as discussed in the previous bullet point. Here’s the kicker, though: the President’s Trophy winner gets to layout the bracket. Are the Howe and Gretzky Conferences gonna be on the same side of the bracket, or will it be Gretzky and Hull? Everyone will still have to fight and scratch to make it out of their Conference Quadrant to the Final Four, but at one team will shape that journey more than the others. It’ll be nice to watch a GM be on the spot and make an important choice at a time other than Draft Day, Free-agency Day, or Trade-deadline Day.

• But wait, there’s more — In addition to that great bracket-building power the President’s Trophy winner also picks first which wildcard opponent will round out their quadrant of the bracket. So even more strategy comes into play before the first playoff puck drops. Do you give yourself the weakest opponent? Do you go with the closest geographically to cut down on travel? Does you make a pick that is based on avoiding a “really hot team” that streaked its way into the playoffs on an amazing run? All great questions that will make the selection ceremony that much more interesting. The next best Conference Champ picks his wildcard opponent second and so on until the bracket is set. Again, it’ll be super-interesting to tune in to see what the GMs will do that day.

I know that there are TONS of issues with this realignment map. Such as splitting up Pittsburgh and Philadelphia; Causing lots of extra travel (especially during the playoffs for Wildcard teams); Having a shorter season that makes it nearly impossible to break old records (but c’mon, Gretzky made most of them unbreakable even in a 100-game season). But, whatever! The in-conference intensity, the race for the President’s Trophy and crazy-awesome playoff format (that we get to even earlier) would all make it totally worth it.

Until next week, amigos!