Busy work week delayed this week’s entry, but here it is. This week, we go all kinds of crazy. We throw caution to the wind and make the NHL the biggest league in North American professional sports — 36 teams!

Florida’s unbelievable movement on the first day of free-agency has inspired me to remove them (for now) from being on the list of teams that gets relocated pretty much every week. In fact, the only team that got relocated this week was the Phoenix Coyotes (poor, Glendale). 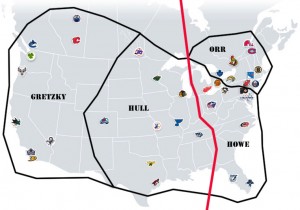 • We’re the biggest! — Niche sport, my ass! This NHL is bigger than the NFL… four teams bigger. People will argue about talent levels, attendance numbers, blah, blah, blah… but again refer to my King of North America Defense. This is totally a fantasy world… but oh what a fun one it’d be.

• Somewhat less travel — It’s not as buttoned-up as last week’s effort, but it’s still pretty good. Divisional games for teams in the Hull Division would always be Central Time Zone accept for when Colorado is involved. Gretzky Divisions teams never go to the Central Time Zone for divisional games, just Pacific and Mountain Time Zones. Both divisions of the Eastern Conference are entirely within the Eastern Time Zone. Much better than now (for almost everyone)… sorry, Avalanche.

• Detroit and Columbus outta the West — Same as last week… Wings and Blue Jackets finally get their  wish.

• Canadian Teams Galore — Hamilton and Quebec (re)join the NHL, bringing the number of Canadian teams up to nine.

• Better Geographic Distribution — By adding four teams to the West vs. two teams for the East, we have a little more balanced league, geographically speaking. Nice little clusters of cities start to emerge allowing for lots of outta-town road trips to see your team play. Portland/Seattle/Vancouver… Edmonton/Calgary… San Jose/Las Vegas/LA/Anaheim… Dallas/Houston… KC/St. Louis… pretty much everyone in the Northeastern US and Eastern Canada.