In this week’s edition, we’re gonna (temporarily) toss out my King Of North America Defense, and be realistic with the realignment. Word’s be going around in the last few days that the NHL is already looking into 2012 realignment and that the four-division set up is probably going to make it’s triumphant return. Woot!

In the spirit of this news, I’m gonna stick with all the teams as they currently stand, and just realign to four divisions with names that might actually happen. With geographic division names, I’d love to get homage naming into the conferences (if conferences even exist). 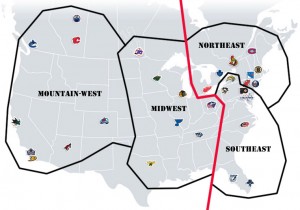 None (Now, wouldn’t that be great?)

• Nobody loses their team — The anguish that Quebec, Atlanta and until recently, Winnipeg and Minnesota fans felt are nowhere to be seen in this scenario. Yay!

• Less travel — With no team having to travel more than one time zone over for divisional games, the Western conference teams have a little less to complain about.

• Detroit outta the West — They finally get their wish. And they get to be in the same division as the Leafs, Havs, B’s and Rangers. Five out of six Original Six teams in one division… Heaven!

• Room for expansion — I know that the NHL says they have no expansion plans for now, but even in this “reality-based scenario”, a healthy  league can easily grow into two more markets and reach the sports-nirvana of 32-teams.