Whale of a Tweak

I know the economic viability is a question, but everyone loves the idea of the Whalers (and their AWESOME uniforms) coming back into the league. for some reason we all have a soft spot for ’em.

In order to accommodate this and keep last week’s structure, our league is gonna have to lose a team that few (especially Jeff Carter) have any kind of soft spot for… Columbus.

Let’s see the result (Those readers who are extra keen will notice a whole lot of copy/paste from last week… shhhhh!). 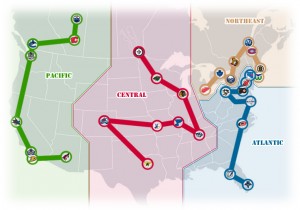 Two relocations plus two expansions equals a 32-team league. Our breakdown this week yields yet another four-conference alignment. Each conference is made up of 8-teams that are reasonably geographically clustered.

*Bonus fun—This week, the new teams in Seattle and Quebec City get there names and logos from concepts put forth in the excellent blog, Icethetics. There is a concept page for the the Seattle Metros and the Quebec Tempest (or Tempête). Thought it would be fun to mix it up and give a shout out to a great blog and some amazing work by some of their readers.

• The Whale — C’mon! It’s the whale. Even Brodie from Mallrats knows what’s up.

• Geography/Travel — No division is made up of more than two time-zones. No Eastern Time Zone teams are located in the Western half of the breakdown.

• All-inclusive — Every team visits every other team’s building. The fact that this hasn’t been league policy for so long is a travesty.

• Rivalries —  Other than CHI/DET, all major rivalries are preserved. And as Philly fan and reader of the blog noted this week, many Flyer fans would be more broken up about losing the Rangers and Devils as rivals than the Pens. Many would argue this statement and many would support it… so I made everyone happy and kept all four teams together.

An additional Home-and-Away versus a single opponent in each of the conferences not your own (to rotate through the league every 8 years): 1 home & 1 away vs. 3 teams = 6 games

Top four in each conference qualify. First two rounds determine Conference Champions. Third round is the semi-finals (with the team with the best regular season record choosing his opponent). Fourth round is the Stanley Cup Finals.