Something Old, Something New(s)

My insomnia has served me well this evening. In addition to finally having a moment to finish up this week’s (very late) entry, I’ve gotten wind of the interesting news that sometime on Thursday, a plan for an NBA/NHL arena to be built in Seattle will be revealed. Check the Seattle Times for the story.

Anyhoo, I had planned on going with contraction this week, but this news has forced me to put that off until next week and do yet another realignment scenario with Seattle involved. Toss in the addition of a Salt Lake City team, and we’ve got “something new” covered (even though the city has won a Stanley Cup in the past). I’ve decided to balance out the “newness” with some “oldness”, so we’re giving three former NHL cities a team again. Let’s check the deets… 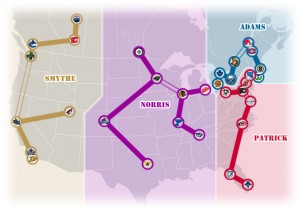 Behold! The return of the 4-Confernce NHL! We’re naming them after our old skool division names—Patrick, Adams, Norris, and Smythe. Eight teams in each division giving us a total of 32 teams. For scheduling reasons only, each conference his subdivided into two 4-team scheduling pods. Looking at the map, you’ll see the two pods in each conference separated thin, double-line. This is a rehashing of our genius plan from many weeks back to allow for a smarter, more-balanced, and more travel-freindly schedule. Please do not confuse these scheduling pods for divisions… a teams primary goal in a season is to finish in the top-four in its conference to qualify for the playoffs, pods have nothing to do with standings. Just scheduling… got it? Cool.

• Geography — In a reasonably decent effort (if I do say so myself), the conferences are pretty geographically sound. The one beef someone might have is the DET/COL jaunt, but if that’s the only two-time-zone jump anyone has to make, I think we’re good… and compared to what the Wings currently deal with, I’m sure they won’t mind. Plus those teams have some nasty history… it’ll be fun.

• Travel — Games outside your conference consist of one home and one away game per team, minimizing the longest of the NHL’s trips. Scheduling pods lessen the longer trips within conference as well. Win-win.

Top four teams from each conference qualify for the playoffs.

First and second round of the playoffs determine Conference champions and give us our Final Four.

Final Four team with the best record chooses its opponent for the Semi-final round (will be cool to see what factors will go into this choice—travel distance, least-hot goalie, how tired an opponent might be from previous series, etc.)

Two Semi-finals winners square off in the Stanley Cup Finals