All the People, All the Time

Okay, our short-lived happiness (or hatred for many others) of having finally gotten a bold new NHL that accentuates rivalries tries something new and isn’t just and NBA-on-ice is over and done with. Yes, we understand a good chunk of the purpose behind the plan in the first place was to act as a veiled first salvo against the NHLPA in the forthcoming CBA renegotiation… and begrudgingly I have to admit that it was a pretty brilliant calculation by the billionaires getting them the ever-elusive “win-win situation” against the millionaires. But whatever the reasons/ploys/shenanigans (for both the proposal and rejection) NHL realignment is where it is now… a necessary ingredient for future NHL success that is in more treacherous waters than ever AND now with tons of declared “issues” that one side or the other doesn’t want to have included.

So where do we go from here?

My seething anger at the snafu in general, and more specifically, the dark CBA implications that it foreshadows has died down a bit in the last 24 hours and  I’m ready to continue with the NHLRP. This week I’m gonna root my efforts in reality and do my very best to please all the people (we’re supposedly able to do this some of the time, no?).

I’ve cut out the BS, and sold the Phoenix franchise to suitors from Quebec City. The NHL (the league office, that is) is no longer in the business of running teams. If you’re an owner and want out, you find a buyer and you sell. If you can’t, your team is auctioned, and if necessary moved to a new city… and we do the re-alignment dance again.

The basis of this week’s map is this: there are TWO CONFERENCES made up of FIVE DIVISIONS each. Your principal job as a team in the new NHL is to win your division… basically, have a better record than the other two teams in your division and you’re in to the playoffs. The in-division hatred and rivalry will be amped up beyond belief with 8 games versus each of your two division-mates each season. To satisfy the “But wait, I’m in a stronger conference—boo-hoo” camp, if you don’t win your division, there are three wild-card spots in each conference available to sneak in you into the playoffs too. More on all this later. First let’s look at the map. 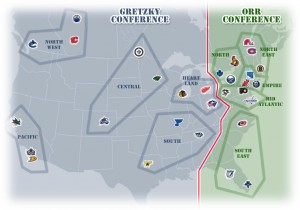 Again, we have two conferences, named after (arguably) the best defenseman and the best forward of all time, Bobby Orr and Wayne Gretzky. In something more akin to the pod structure we’ve featured in a few past NHLRP entires, the conferences are divided into very small divisions of three teams each. In addition to being all equal in size (addressing one of the grumblings of the NHLPA and others in the now-dead plan), these smaller conferences lend themselves to a much better scheduling/travel structure as we’ll see in a bit as well (addressing an issue both sides have sited). Here is how the teams fit into the divisions. I tried my best to keep geographic and traditional rivals together (this one is mostly for the fans).

• Scheduling/Travel — Listen up, NHL and PA (and you too, Red Wings and Stars)! Here is the solution the biggest issue of the day (besides the egos of many of the combatants in the forthcoming CBA battle):

3-team divisions mean that the season is made up of 3 things:

– It’s simple enough for fans, players and owners to grasp.

– Road trips are reasonably short, and as an added bonus, the travel from game-to-game during each a road trip isn’t too bad since divisions are “reasonably small” in geographic scope.

– Everyone loves home-and-home series which mean to 120+ minutes of game-time agains “those same bastards” in a very few days (PIMs galore!). Toss in the fact that “those bastards” are who you are in essence, fighting against for a spot in the playoffs, and you play each of your two division-mates eight times(!) per season, those games will be more intense then we can imagine.

– Oh, and every team plays every other team both home and away (Something the NHL and the fans wanted). See the Schedule Breakdown section a little further down the page for even more on the sublime simplicity (and “you can’t argue against this-ness”) of the plan. By the way, if you need someone to write a program that will whip out a sample schedule (another of the NHLPA’s beefs, I know a guy… just send us a slice of your millions and billions and consider it done.

• Fairness — Unlike the  NHLPA, I don’t subscribe to the “the teams in the 7-team conferences have are more likely to make the playoffs” argument (listen, you are more likely to qualify for the post-season in an awful 8-team conference than a really competitive 7-team conference), but this point is moot now anyways. This new plan calls for all teams play in equal-sized divisions with the same coin-flip percentage of making the playoffs, so everyone is happy, right? Additionally, with the “escape hatch” of there being three wild-card spots available to the non-division champs with the three best records, and there should be no whining.

• Rivalries —  The majority of the principal divisional rivalries are preserved. PIT/PHI, the 3 NYC-area teams, DET/CHI, MTL/BOS, the 3 California teams, the 3 Western Canada teams are all keep alive and well.

• Homage/Heritage — We get to name the two Conferences after two great players who I hear are great guys as well. (Plus with 10 divisions mostly having directional names, I wasn’t about to throw two more directional names into the mix)

• John Williams — With a division named “Empire”, there definately be a lot of in-arena playing of Vader’s theme from Star Wars. Bahn-bahn-bahn, bahn-BA-duh, bahn-BA-dah!!

Each team plays another set of games against the three teams from two divisions in their same conference: 2 games x 6 teams = 12 games (again, played in a three-game road trip and three-game home-stand (which divisions you play rotates each year, complete in 2-year cycles)

Pretty simple. It doesn’t completely keep Detroit and Columbus from having to make long in-conference road trips, but the trips are shorter in duration and more logistically sensible. Plus, as far as non-Eastern Time Zone road-trips go, the Wings and Jackets would only have two more of those than they would have Eastern Time Zone road-trips. The Stars, Ducks, Kings and Sharks no longer have to deal with a divisional opponent two time zones away either. Two MAJOR scheduling issues resolved! If they gave out Nobel Prizes for this kind of work… I’d like your support during the process, everyone. If a Nobel Prize is outta the question, I’d settle for life-time tickets to the Stanley Cup finals……….. or some backlinks.

Playoff qualification is now a reward for hard-earned divisional championships with three wildcards available for the “fell-just short” teams. While this is a bit different, the structure of the playoffs themselves is pretty much what we currently have (addressing yet another major concern of many players, teams, fans).

NHL is just better when divisions mean more than conferences. Ladies and gentlemen of the jury, I present to you exhibit A in this argument: The NFL… and exhibit B: The NBA. It makes infinitely more sense for teams to identify with their own division and rally against division-mates in epic struggles to qualify for the playoffs, than to think of them as just another few teams to deal with in a vague quest against 14 other teams for one of 8 spots.

In short, we’d rather have teams claw, scratch and fight for 5 division crowns (with 3 consolation prizes), than meander through a season in search of one of 8 prizes (3 of which have a lil’ bonus attached).