This week, we continue our effort to find the “perfect 32” homes for a slightly expanded NHL. Last week we left all current host-cities alone, just adding two new cities (Kansas City and Quebec) to bring us up to 32 teams. This week, we’re a little less nice. Gone are Phoenix and Columbus and we add two Canadian teams as well as two American teams to bring us up to the magic number. We also tweaked the layout of the four conferences a bit… making travel a little bit more equitable across the board. 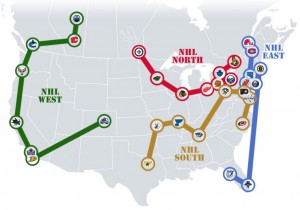 Again, our conferences all have eight teams. Conferences are named for the four cardinal directions: West, South, East, North.

• Simplicity — It’s much easier (especially for casual or new fans) to understand the setup of the league.

• Travel equity — Unlike all the efforts to minimize travel that so many have strived to achieve, we’ve actually increased travel for most teams. In an effort to create a more balanced travel schedule across the league we’ve “forced” every team to be in a conference that has a “medium-distance” travel load. The NHL West and NHL East have a heavier north-and-south travel burden… while the NHL North and the NHL South have a heavier east-and-west travel burden. I’m going to stop trying to explain this with words, now and just refer you back up to the map. ?

• Rivalries —  The major rivalries preserved in Gary’s plan are still here, plus we get a Kansas City/St. Louis one to enjoy now… not to mention the Montreal/Quebec rivalry that will be revived as well. Hamilton drops into the middle of the Golden Crescent to make a nice trifecta. Detroit and Chicago stay together, but join the Leafs to make a conference with three Original Six teams. The remaining three O6 teams (Montreal, Boston and New York) are all in a single conference as well.

Same set up as last week:

One home and one away with a single team from each of the other three conferences (rotating each year… completing the loop every eight seasons): 2 games x 3 teams = 6 games