The second scenario takes the same 2011-2012 map we presented earlier and shows how alignment would look if the Phoenix franchise were purchased and relocated to Quebec City. Quebec has a passionate fan base ready to reclaim their position in the NHL (not to mention their rivalry with the Habs). Realignment would be a bit more complex than the Kansas City model, but still quite feasible. Quebec would be part of the Northern Division, Columbus would move across our conference divide into the Central Division, claiming the spot made vacant by Colorado’s move to the Western Division, in turn filling the void made by Phoenix’s move to Quebec. Detroit complete realignment with a move to the Eastern Division to keep both Orr Conferences at eight teams and maintaining the logistics/structure we outlined above. 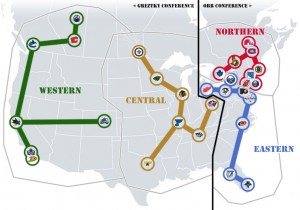 The NHL Realigned – Near Future (PHX-to-QBC)

In sum, this is the collected and recommended thoughts on NHL realignment and potential relocation(s) from the NHL Realignment Project. In the coming weeks, we will continue our exercise of mapping out potential scenarios for the shape, size and structure of (y)our beloved NHL.

Thank you for your time and attention.

— Thomas J. Fulery (and the fans of the NHL)

As always, thanks for reading (especially you, Gary). Until next Sunday!