Pod Casting – There’s No Place Like Home (and Away)

This week we go to pods for the NHL Realignment Project. The addition of the Seattle Shamrocks and the Quebec Nordiques gets our league’s team count up to (our favorite very divisible number,) 32. In an effort to not only divide the teams up the best, but also put forth a reasonable schedule we’ve opted for breakdown of 2 Conferences each with 4 Divisions which in turn each have a North and South Pod.

We’re going with geographic Conference names and honorific Division names and geographic Pod names. Your purpose as an NHL team in this version of the league is to end up in the top-two positions of your Pod to qualify for the playoffs.

Playoffs would thus continue to be 16 teams and go four rounds, but the rounds would be:

Let’s get to the map: 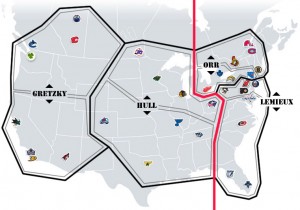 • Organization — With the magic number of 32 teams, we have more options of dividing teams up… but in addition to that, with divisions AND pods, we now have a system that let’s tighter geographic rivalries flourish and cuts down on the number of times teams have to travel to non-divisional foes. How, you say?…

• Scheduling — Everything in-Division (and thusly, in-Pod) would be based on home-and-away series. Each non-Divisional opponent would be played once at home and once on the road, but not necessarily in the back-to-back format that is generally associated with home-and-home series. Sooooo…

• Records — Since we’ve been able to keep an 82-game schedule (18+16+48=82), records that are already on the books and players current and future attempts to break them are on the same level playing field.

• Rivalries — I’ve done my best to keep as many traditional rivalries intact inside of pods or at least in division (the biggest failure in this regard was breaking up the NYC-area teams… but I’ll try another pod breakdown to keep some/all of them together.

See you next week (gonna try to post every Sunday moving forward, so put it on your calendar)!