With all the recent talk of NHL Realignment, it’s apparent that it’s a very emotional subject. “It’d be an insult if…”, “How dare they consider the possibility of…”, “If they do that, I swear I’ll…” So this week on the NHL Realignment Project, we take emotion out of the equation and ask ourselves, “WWJD?”… What Would Joshua Do? (For you younglings out there Joshua was the computer program from the 1983 classic motion picture, WarGames… but if that’s too “old and dumb” for you, feel free to swap Joshua out for Iron Man‘s Jarvis… cool?).

Anyhow, the idea is, if a computer program were tasked with dividing the current NHL into six divisions, it would of course plot the centerpoints of all 30 teams on the map and draw a line down the map  that’d leave us with 15 teams on either side of the line… Joshua/Jarvis would designate that line “CDL” for “Central Dividing Line”. Joshua/Jarvis would then (very clinically) slide a line east from the CDL and west from the CDL and create a new divider as each time said line crosses five teams’ centerpoints.

Joshua/Jarvis would name the divisions E1, E2, E3 and W1, W2, W3 with numerals ascending as we travel further East or West of the CDL.

So here is the map: 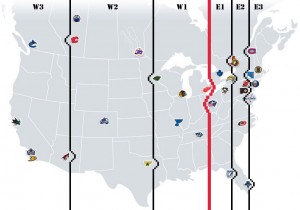 • Our mechanical overlords have spoken — Benefits should be obvious. Questioning anything shall result in termination.