Just like last week, we’re taking our NHL realignment inspiration from another league. Since it’s the most successful sports league in North America, maybe copying the NFL ain’t too bad an idea. So we divide our NHL into two conferences (Campbell and Wales) each of which is divided into North, South, East and West divisions. Unlike last week, I’ve taken a little more care to keep/create some good rivalries with the new conference/division breakdown… couldn’t get the Pens/Flyers rivalry to work out (sorry, Pennsylvania).

Overall, this works better than the MLB version… and surprisingly, works pretty well in general. 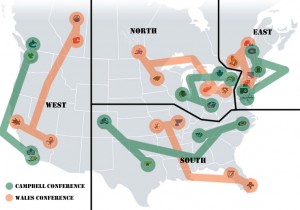 • Travel — Reasonably even travel across the league.

• Rivalries — Each of the four-team divisions is made up of two rivalry pairs. As stated earlier, the Pennsylvania pair got lost, but other than that, we’ve got a good mix of traditional hatred and/or geographic proximity throughout the league to keep things interesting. Heck, the Pittsburgh-Detroit and Philadelphia-Washington pairings are pretty damn decent replacements for the Pens-Flyers loss.