Couple the New York Islanders continuing drop from legendary, elite team of the past to neglected, passed-by team of the present, with their failure to get a new arena financed, I thinks its time to add the four-time champ to the relocation/realignment mix. Before everyone gets their britches in a bind, yes, I understand that it’s more of an “willingness of the owner” issue, but to counter that argument, I present exhibit A: The Atlanta Thrashers.

So, this week in my fantasy world, I’ve pulled the (for all intents and purposes) arena-less Islanders and taken them all the way across the country to Portland, Oregon. Portland has a more-than-ready area and minimal competition from other sports (the NBA’s Trailblazers and the MLS’s Timbers). In my Foolish Hockey World, teams that leave their current media market, don’t take the franchises history and records with them… so the four Stanley Cup banners stay on Long Island… waiting for a new team to appear (relocate to Long Island and reclaim that glory). 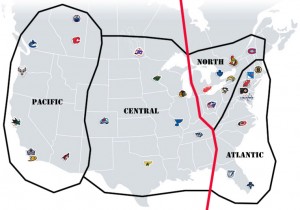 • Conference Balance — Each conference has 15 teams (but divisions still have a bit of an imbalance (7 teams or 8 teams).

• New York Eyeballs — With the Rangers and Devils being more successful than the Islanders for the last few decades, the fans in the NYC metro area have leaned away from the Islanders lately. There was already a debate when the Devils came to town that three was too many, but it looks as if the Devils ended up winning the hearts-and-minds tug-of-war to be “The Other NYC Franchise”.

•  Travel Balance — This new alignment has caused several teams (Dallas, Detroit, Columbus) to have to travel less than they currently do for intra-division (and especially in-conference for the Wings and Jackets) games. Conversely it has caused more teams in the East to travel a little more. Sorry, East, but its time to pony up a little bit in the interest of balance.

• Revamped Scheduling/Rivalries — So in an interest to make up for the fact that the Habs/Bruins and Pens/Flyers divisional rivalries, I’ve devised a new scheduling format to allow for TONS of extra games against a traditional rival (kind of a super-charged version of what they do in the Big Ten Conference in football).

– Every team would play 2 more home-and-away series against 2 out-of-conference opponents. The three opponents would rotate out every year (you’d cycle through the 16 teams every 8 years) – 4 games… Bringing us to 74 or 76 games.

– The teams in the 7-team North Division play one extra home-and-away series with one of the other teams the 7-team Central Division. This would be on a rotating basis, so that every seven years it resets… This brings everyone up to 76 games.

– Every team then pairs up with one in-conference arch-rival (e.g. Boston-Montreal, Pittsburgh-Philadelphia) for yet three more home-and-away match-ups. This pairing would be permanent – 6 games… Bringing everyone up to 82 games.