I bet you read “dessert” just now. As nice as that sounds, we’re talking desert, as in dry heat. This week, not only do we not lose the Phoenix Coyotes (hey, if Congress can come up with a deal, why not the City of Glendale?), but we add the Las Vegas Scorpions (or some other, more creative mascot). Sorry, Canada… no Quebec, Hamilton, Saskatoon, Regina, Yellow Knife or Moose Jaw teams this week. 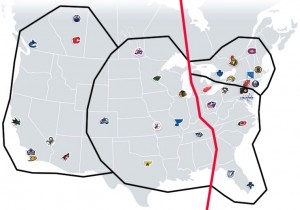 • Arena-ready — Kansas City is already there.

• Publicity-ready — Vegas is already there.

•  Our old friend, “less travel” is back — Every team in the Eastern Conference is from the Eastern Time Zone. The teams in the Western Conference never have to travel two time zones for an intra-divisional game. And of course, Detroit (and Columbus) are outta the west now.

New update later this week (since this one was a few days late)!