Thanks to a busy holiday weekend (and thinking about last week’s map a bit more), I’ve just tweaked the previous map a bit for NRP Week 6.

Sticking with the geographic names for the four divisions like last week. Unlike the previous edition, we’ve unbalanced the East and West. 16 of the 30 teams are Eastern Conference teams now. Columbus joins the Red Wings over in the East leaving 14 teams in the West. This is a very distinct possibility in the real world. We’ll see if Gary & Co. have the grapes to do this, though. I’d be cool with it. 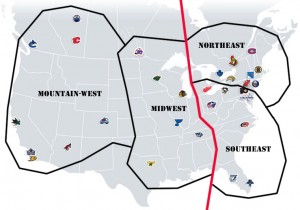 None (Now, wouldn’t that be great?)

• Nobody loses their team — The anguish that Quebec, Atlanta and until recently, Winnipeg and Minnesota fans felt are nowhere to be seen in this scenario. Yay!

• Less travel — With teams in three of the four divisions never having to leave their time zone for divisional games (and Mountain-West teams only having to, at most, travel one time-zone over), the frequent flyer miles haven’t seen such little use since the Original Six days.

• Detroit and Columbus outta the West — Wings finally get their long-standing wish. For good measure, Columbus gets their wish too.

• Room for expansion — I know that the NHL says they have no expansion plans for now, but even in this “reality-based scenario”, a healthy  league can easily grow into two more markets and reach the sports-nirvana of 32-teams. This set up of 16 teams in the East bodes well for westward expansion (we’re looking at you Las Vegas, Seattle, Portland, Houston, Kansas City, Salt Lake City). Conversely, this bodes ill for Hamilton and Quebec City… who knows, maybe I’ll have a 36-team league in a future installment, and everyone can be happy!